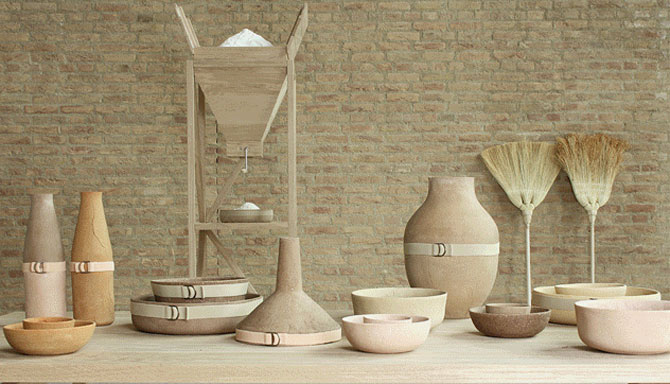 Everything that happens inside the four walls of the Villar-Rosàs house is worth mentioning. The exhibition Autarchy & Botanica by Formafantasma shows the work of the Italian designers Andrea Trimarchi and Simone Farresin, the founders of Studio Formafantasma, based in Eindhoven, Holland. They began working together while in the university, but it was when they arrived to the Design Academy that they got interested in product design.

Their work explores topics such as the role of design in traditional craftsmanship, the relationship between tradition and local culture, critical approaches to sustainability and the meaning of objects as cultural behaviour. Andrea and Simone define themselves as a bridge between craftsmanship, industry, the object and the user, engaging in a dialogue about critical and conceptual design.

Some of his products belong to several collections including Droog Design, Rossana Orlandi Gallery, Moss Gallery, The Art Institute of Chicago and Vitra Design Museum, among others. It has also been displayed in the Design Miami/Basel, the Dutch Design Week, Milan, New York and the prestigious auction house Sotheby?s. Now it?s the turn of Barcelona and the exhibition Otrascosas de Villar-Rosàs including two of their most representative projects: Autarchy y Botanica.

What: Autarchy & Botanica by Formafantasma.

This website uses cookies to improve your experience while you navigate through the website. Out of these, the cookies that are categorized as necessary are stored on your browser as they are essential for the working of basic functionalities of the website. We also use third-party cookies that help us analyze and understand how you use this website. These cookies will be stored in your browser only with your consent. You also have the option to opt-out of these cookies. But opting out of some of these cookies may affect your browsing experience.
Necesarias Siempre activado

Any cookies that may not be particularly necessary for the website to function and is used specifically to collect user personal data via analytics, ads, other embedded contents are termed as non-necessary cookies. It is mandatory to procure user consent prior to running these cookies on your website.